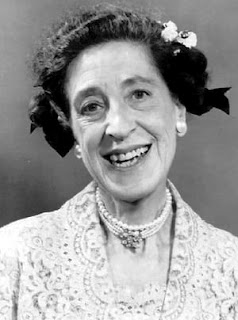 Doro Merande (Dora Matthews 1892-1975)
The specialty of the angular, stiff-framed Doro Merande was her comedic interpretation for any number of eccentric characters, whether a dowdy small-town snoop, a maid, gossip, a terse secretary, or a sour neighbor. Her dry wit, high nasal warble, half‐opened eyelids, a smile of childish innocence, or a bewildered look, made her one of the most endearing characters of stage, film, and television. It might have been overkill to have her in lengthy roles, but she pops up delightfully in small doses. It is easy to understand that live theater was her first love. I can only imagine the effect she had on a live audience. Staying focused on my Obscure Cinema blog, I offer a couple of Merande performances in film and television plus a film of considerably less obscurity.
Prior to television's rising popularity, she could be captured in all her comedic glory in Cover Up (1949). Starring Dennis O'Keefe, Barbara Britton, and Williams Bendix, the mystery-romance film is easy to like with some lighthearted scenes. But by far the most amusing performance is Merande's character, Hildy, the maid to end all maids, with her casual asides suggesting she is completely out of touch with reality. Far from it. She is a walking encyclopedia of everything that goes on in the family and in town, delivering astute, cutting opinions as if they were compliments. Britton's father, Art Baker, appears to be the prime suspect in an assumed murder according to O'Keefe's investigation. Hildy takes it upon herself to deliberately set fire to Baker's old college coat—a key piece of evidence—in the backyard. She nonchalantly confesses to him in passing, "I had a little accident with your beaver coat. I was cleaning it and it caught fire—burned up completely." As she exits the scene, Baker looks at her in confused amusement. 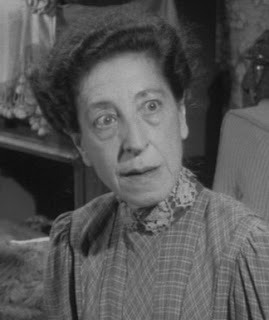 With the dawn of television, Merande could be seen on a number of popular shows through the Sixties. A memorable small-screen performance was from a 1958 black comedy episode of Alfred Hitchcock Presents entitled, "Mrs. Herman and Mrs. Fenimore." Merande is a poor widow who has devised a fool-proof plan to kill her crotchety live-in uncle, Russell Collins, for the inheritance money. Merande is delighted when a struggling actress, Mary Astor, becomes her new tenant. Through feigned empathy, Astor elevates Merande to a new level of sophistication and they agree to work together on Collin's demise. But the gullible Merande is unaware—as is the viewing audience—she has been duped. Her dumbfounded big-eyed stare at the end seals the episode. 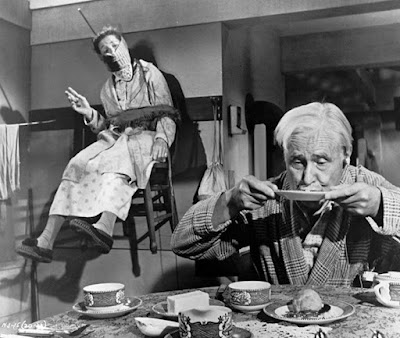 There are many other roles of varying length for Merande, of course, but she was never quite so visually funny in her sporadic appearances in the Cold War paranoia spoof, The Russians Are Coming the Russians Are Coming (1966). Merande is one of the few things that has remained timeless about the film. Dressed in pajamas and robe, she is the ever-vigilant beacon during the assumed invasion. In a burst-out-laughing scene, we see Merande—about four feet off the floor still seated in a chair—placed upon the wall by the Russians to keep her away from the telephone. Her stone-deaf husband, Parker Fennelly, not only cannot hear her muffled screams behind her scarf, he is completely unaware that she is on the kitchen wall. Kind of funny just key stroking that. When a friend arrives to rescue her, he finally turns around to ask what she is doing hanging up on the wall. It is a hilarious cartoon moment.
Merande's final role was in the remake of The Front Page (1974). The actress was attending a "Honeymooners" anniversary special in Miami when she suffered a stroke and died at a local hospital. Gone but never forgotten.
A special thanks goes out to Aurora for hosting the tenth-anniversary WHAT A CHARACTER! Blogathon on December 4, 2021. 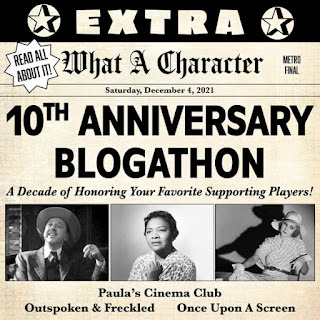